Co-Sponsors: The Henry M. Jackson School of International Studies, the UW Center for Human Rights, Hillel, and the Jewish Studies program are our partners in this event.

RSVP via Symplicity or Email.

May 6: Thomas Buergenthal Reading of A Lucky Child: A Memoir of Surviving Auschwitz as a Young Boy 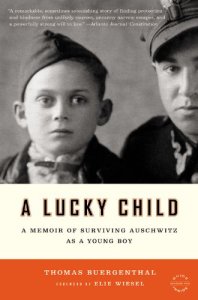 Thomas Buergenthal, a retired Judge from the United Nations International Court of Justice and current Professor at George Washington University Law School, will speak on his experience as a child survivor of Auschwitz.  Professor Buergenthal will discuss questions of international human rights, and will read from his recent book A Lucky Child: A Memoir of Surviving Auschwitz as a Young Boy in which he recounts the astounding story of his surviving the Holocaust as a ten-year old child owing to his wits and some remarkable strokes of luck.

“Not many children who entered Auschwitz lived to tell the tale….Buergenthal was one of the death camp’s youngest prisoners… Buergenthal’s authentic, moving tale reveals that his lifelong commitment to human rights sprang from the ashes of Auschwitz.”

Free and open to the public. Dessert to follow.

RSVP for the event here.

May 6: Social Justice Tuesday – Making the Most of Your Public Service Experience This Summer

Panelists will address several questions including:

Students will share tips and strategies on how you can make the most from your upcoming summer in public service.

May 15: Networking Happy Hour with Friends of GlobalWA & Humanosphere

Meet others in the Seattle area who are engaged in or interested in international development.