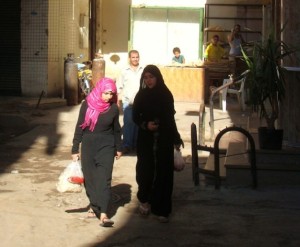 El HAWAMDIA, Egypt , Aug 5 2013 (IPS) – Each summer, wealthy male tourists from Gulf Arab states flock to Egypt to escape the oppressive heat of the Arabian Peninsula, taking residence at upscale hotels and rented flats in Cairo and Alexandria. Many come with their families and housekeeping staff, spending their days by the pool, shopping, and frequenting cafes and nightclubs. Others come for a more sinister purpose.

In El Hawamdia, a poor agricultural town 20 kilometres south of Cairo, they are easy to spot. Arab men in crisp white thawbs troll the town’s pot-holed, garbage-strewn streets in their luxury cars and SUVs. As they arrive, Egyptian fixers in flip flops run alongside their vehicles, offering short-term flats and what to them is the town’s most sought-after commodity – underage girls.

Each year, in El Hawamdia and other impoverished rural communities across Egypt, thousands of girls between the ages of 11 and 18 are sold by their parents to wealthy, much older Gulf Arab men under the pretext of marriage. The sham nuptials may last from a couple of hours to years, depending on the negotiated arrangement.

“It’s a form of child prostitution in the guise of marriage,” Azza El-Ashmawy, director of the Child Anti-Trafficking Unit at the National Council for Childhood and Motherhood (NCCM) tells IPS. “The man pays a sum of money and will stay with the girl for a few days or the summer, or will take her back to his country for domestic work or prostitution.”

The girl is returned to her family when the marriage ends, usually to be married off again.

“Some girls have been married 60 times by the time they turn 18,” says El-Ashmawy. “Most ‘marriages’ last for just a couple of days or weeks.”

The deals are hatched in El Hawamdia’s myriad “marriage broker” offices, identifiable by the conspicuous presence of air-conditioners in a ramshackle town with intermittent power.

The brokers, usually second-rate lawyers, also offer a delivery service. Village girls as young as 11 are brought to the Arab tourists’ hotel or rented flat for selection. Arab men travelling with their wives and children often arrange a separate flat for such purposes.

In May, Jossour Forum Des Femmes Marocaines, a Moroccan women’s rights organization and an ABA Rule of Law Initiative (ABA ROLI) partner, held a national colloquium in Rabat on the implementation of the 2011 constitution’s women’s rights-related provisions. Attended by 140 civil society representatives, parliamentarians, journalists, human rights lawyers and citizens, the event was organized to advance the constitution’s gender-parity provisions by educating the public and by advocating for women’s rights.

Read more about the colloquium here.

News from the National Law Center on Homelessness & Poverty

Across the country, advocates, including homeless and formerly homeless people, are calling for legislation that protects the basic rights and dignity, and ensures equal access to opportunity regardless of housing status.

Last year, Rhode Island became the first state in the nation to enact an enforceable bill of rights, and the Law Center is proud to have worked with advocates there on that effort.  Since then, similar bills have become law in CT and IL, one is in the works in CA, and advocates in other states are contemplating similar initiatives. We are supporting these efforts and planning more support going forward.

These new laws aim to prevent discrimination based on housing status in the use of public space, as well as in employment, housing, voting.  These are key issues in communities across the country-and such discrimination serves as a barrier preventing their efforts to escape homelessness.  Fighting discriminatory policies with proactive, affirmative campaigns goes to the core of our mission to end and prevent homelessness.

We’re also working with the US Interagency Council on Homelessness, and the Department of Justice to build on the report published by the two agencies last year, Searching out Solutions, and to urge further steps by these and other federal agencies to implement its recommendations. Click here to continue reading.

Landlord Discrimination Restricts the Use of Rental Vouchers 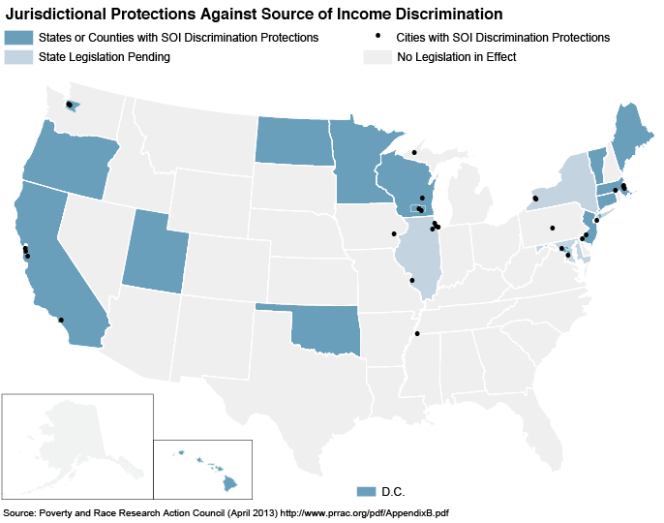 Our latest report on housing discrimination found that some of the most blatant acts of discrimination against racial and ethnic minorities have declined over the last decade. However, minority renters and homeowners are still shown and told about fewer properties than similarly qualified whites. These forms of discrimination raise the costs of housing searches for minorities and restrict their choices.

Low-income minority renters face another form of discrimination when using Housing Choice Vouchers (HCV) to help pay for housing. The Housing Choice Voucher Program (HCVP) is the nation’s largest federal housing assistance program, providing more than 2.1 million low-income households with vouchers to subsidize their rent in the private market.  The Federal Fair Housing Act does not prohibit discrimination against renters based on vouchers or other sources of income (SOI).   Although ostensibly HCV facilitates mobility to better neighborhoods, because HCV program participants are not a protected class under the Fair Housing Act, landlords are free to reject their applications because of their voucher. This has the potential to limit housing choice. Continue reading here.